During the Thanksgiving break, a mural was painted on the wall of the lobby at Morrison Elementary.

Amy Alexis, wife and partner of local mural artist Bryan Alexis works as the librarian and media specialist at Morrison Elementary. She proposed the idea to create a mural in the entryway of the school for a public open house event. Bryan readily agreed to the project as a way to enhance community at the school and give the students a connection to art and the opportunity to see the process up close. Through the efforts of a great team of administrators and faculty jumping in to help paint the mural, they were able to complete the painting in a single day! Read below the meaning behind the mural:

“The title of this work is The Heartbeat of the Land.

There are few symbols as powerful as that of a horse. In it lies strength, endurance, swiftness, companionship, and family. The Mustang, even more so, is a living symbol of the pioneer spirit.

There is no more apt mascot for Morrison Elementary, the small school on the northside of Fort Smith, Arkansas.

The Mustang coat shows the entire range of color found in all horses. They travel as family groups and defend one another as

fiercely as they care for each other. Just so, Morrison is a diverse and close-knit community.

This work displays two Mustangs in full gallop. They run in the same direction, one slightly behind, encouraging the other

onward. They represent strength of character, the ability to endure hardship and overcome, swiftness of both mind and body, the ability to develop friendships and connections that can last a lifetime, and a family bond that ties the faculty and students together at Morrison.

at Morrison. Sun rays streak backward illuminating the path for others to follow.

Morrison Elementary is vital as a place to educate and build young lives. Like the Mustang, it is the heartbeat of the land, written in the thunder of their hooves.”

Bryan Alexis is a professor at the University of Arkansas–Fort Smith. There he teaches courses in graphic design. Along with teaching, Bryan works as a freelance designer for clients such as WeatherBarr Windows, City of Camden, and Mainstreet El Dorado. In 2015 he created a mural for the Unexpected Project in Fort Smith, Ark., which launched him into the world of painting large-scale public works of art. Since then he has produced over 30 murals in Arkansas and Oklahoma, some as large as 3700 square feet. 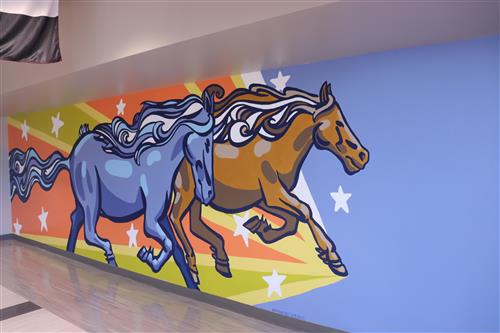