The 2019 Store/Cafe Marketing Contest sponsored by School Store Point of Sale, a partner of National DECA, is a business that installs, trains, and supports Private (Retail or Wholesale) Businesses & School Stores across the United States. The Grizzly Gear team, along with teachers Melinda Briscoe and CeeCee Hollimon, created a presentation compiled of their Small Business Saturday sales, their social media impact, as well as the largest campaigns that created the most revenue in the previous year in order to secure this first place win.

Most recently, Grizzly Gear was featured on AETN’s “Cool Schools,” a digital mini series that features unique Arkansas schools. Melinda Briscoe explains in the video that the students are involved in every aspect of the store; from sweeping and taking out the trash, to running the cash register and designing the window display. Student worker Ashley Hart says in the episode, “There’s so many students that come into this program and know they want to go to college but they don’t know that they’re good at. There’s so many options here and you’re not just stuck to one.”

Behind the scenes, students Muhammad Abdulrahim, Anna Cobb, Tearah Gray, Kayla Jenkins, David Kramer, Yaire Lira, Justin Maymoundok, and Derrick Wise work tirelessly throughout the school year (and the summer) to continue to find ways to improve the store. When asked what the best part about working for Grizzly Gear is, Muhammad Abdulrahim, Gold Team, said,  Hands down it had to be working on various projects, especially the gold certification.  Even though it was hard work, it really paid off. This class really made me want to pursue some type of business expertise in any way...” 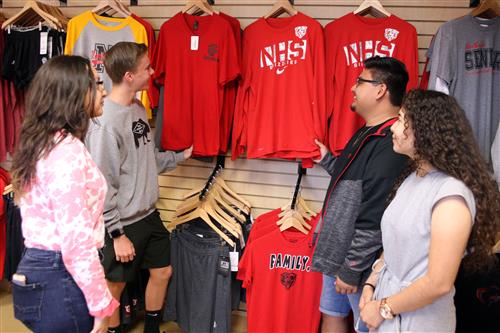