Star Students and Award Winning Staff at the December Board Meeting

DECEMBER 16, 2019 | Board of Education Recognitions

Alison Bonilla is a fifth-grader at Orr Elementary. Principal Dr. Dawn Childress says that Alison is aware of the needs of others and is eager to volunteer help teachers and other students alike. Alison is the daughter of Oscar Bonilla Aguirre and Claudia Herrera.

Lucy Garcia, sixth-grader at Tilles Elementary, is the student who brightens the room as soon as she walks in.  She is a great friend to everyone, and principal Regina Thompson says Lucy can be trusted to always do the right thing. Her teachers say she works well with everyone and is a great motivator to other students. Lucy is the daughter of Liliana Garcia.

Maggie Hesson was nominated by Cavanaugh Principal Hank Needham. As a sixth-grader, Maggie models kindness, concern, loyalty, and wears a beautiful smile to school every day. She personifies goodness and is a devoted and dependable friend. Maggie is the daughter of Mike and Amber Hesson.

Samson Hill, is a sixth-grader at Ballman Elementary. Principal Lori Griffin says he is one of the most thoughtful learners we have ever had at Ballman and puts others' needs before his own. He always chooses kindness and is a super helper to all staff and students at Ballman. Samson is the son of Marvin and Rena Hill.

Alli LaPerle is a sixth-grader at Barling Elementary. Principal Carl Hill said that Alli is hard working and always willing to help! She is a strong leader with a cheerful personality and a prime example of Barling PRIDE! Alli is the daughter of Robert and Ashley LaPerle.

Raycash McCullough who is in the fourth grade was nominated by Beard Principal Pam Siebenmorgen because he is an exemplary student who has, and continues to, overcome challenges every day and does it all with a positive attitude and a smile! Raycash is the son of Raynal Polk.

Rhett Moss is a sixth-grader at Fairview Elementary. Principal Nicole Shaffer nominated Rhett because he is dedicated to being the best version of himself and puts a great amount of effort into everything he does. Rhett is the son of Randy and Stephanie Moss.

Samantha Nguyen is a second-grader at Sunnymede Elementary. Principal Krystle Smith nominated Samantha because she is always on task and working her hardest. She constantly goes above and beyond what is asked of her and she is always willing to help others. Samantha is the daughter of Luat and Teresa Nguyen.

Ambrielle Walker was nominated by Pike Elementary Principal Monica Austin. First-grader Ambrielle gives 100% effort in every assignment or project and helps others without being asked. Ambrielle is the daughter of Jacqualine and Carvelle Walker.

Ballman Elementary Principal Lori Griffin who is in her 27th year as an educator is an Arkansas Department of Education Arkansas Master Principal and a leader in the Professional Learning Communities. We are recognizing her tonight because she has been designated as the Arkansas Association of Education Office Professional’s Education Administrator of the Year. 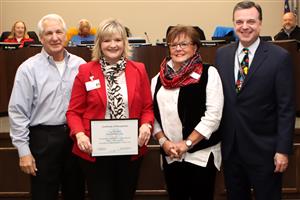 Each year we are delighted to recognize schools that have earned top rankings in the ACT Aspire assessment data. All public school students in grades 3-10 take this test and this awards program recognizes the highest achievement in literacy and mathematics. This year Chaffin Junior High School and Woods Elementary School earned scores that rank both of these school in the top 6-10 percent of all test-takers in the entire state. Along with bragging rights, these schools will also receive rewards money for their accomplishments. Chaffin Junior High will receive $41,400 and Woods Elementary will receive $28,450.

Last, but not by any measure least, Board Member Jeannie Cole was recognized last week by Arkansas School Board Association during the Annual ASBA Conference with the 2019 President’s Award for school board service. This particular award recognizes all school board members who have earned more than 500 hours of school board training. We don’t have an engraved plaque for you like ASBA, but after all these years, we thought you might like one of these lovely FSPS certificates. Congratulations! 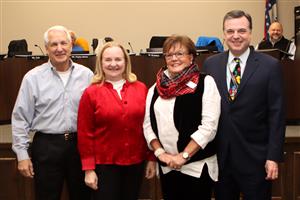