February Board Meeting Recognizes Many

February 24, 2020 | Board of Education Recognitions

Halle Anderson is a fifth-grader at Cavanaugh Elementary. Principal Hank Needham nominated Halle because she exhibits a tremendous work ethic, displays impeccable integrity in all aspects of her life, and maintains a positive mindset every day. Halle is the daughter of Dennis and Fiona Anderson.

Barling Elementary Principal Carl Hill nominated sixth-grader Haley Biggs because she is always on time and coming up with new ways to help their school. Haley is the daughter of Stanley and Edie Biggs.

Reese Bone is a first-grader at Bonneville Elementary. Principal Sharla Whitson nominated Reese because she is consistently positive, kind, and helpful to those around her. Reese is the daughter of Conley and Doris Bone.

Yen Dao is a first-grader at Ballman Elementary. Principal Lori Griffin nominated Yen because she came to the district in the fifth week of school and has shown tremendous growth in learning essential skills and she always comes to school with a smile on her face. Yen is the daughter of Hanh Dao.

Meri Folmar was nominated by Beard Elementary Principal Pam Siebenmorgen because she has every characteristic of a leader and sets an excellent example for other students. Meri is the daughter of Lauren and Jimmy Folmar.

Fairview Elementary Principal Nicole Shaffer nominated fifth-grader Gustavo Lozano because of his continuous positive attitude towards peers, teachers, and whatever task is assigned. Gustavo is the son of Maria Garcia and Gustavo Lozano.

Chanel Oaties is a kindergartener at Sunnymede Elementary. Principal Krystle Smith nominated Chanel because she is always kind and helpful to her peers and teachers. Chanel is the daughter of Tiffany Flowers and Charles Oaties.

Zoey Pope is a sixth-grader at Tilles Elementary. Principal Regina Thompson nominated Zoey because she is dependable and she sets and achieves goals and always encourages others to do the same. Zoey is the daughter of Jacqueline and Michael Pope.

Pike Elementary Principal Monica Austin nominated kindergartener Kate Rego because she is a very active and attentive student. She comes to school every day ready to learn. Kate is the daughter of Micah and Jarred Rego.

Malea Seubold is a sixth-grader at Orr Elementary. Principal Dr. Dawn Childress nominated Malea because she is always friendly and helpful to others and works hard to do everything to the best of her ability. Malea is the daughter of Chuck and Ning Seubold.

STAFF AND OTHER RECOGNITIONS

Every semester, students in Amanda Fry’s Career Development class at Ramsey Junior High participates in a state-wide Stock Market Game organized by Economics Arkansas. After playing the game in her class for the past 19 years, in the Fall of 2019, not only did her class come in first place, one team consisting of Shane Nguyen and Frankie Vargas placed first in their region division among 83 other teams! Congratulations, guys! 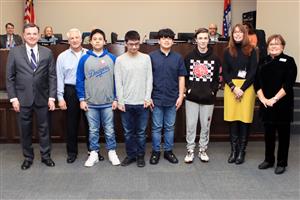 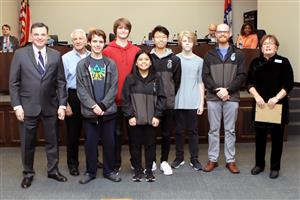 Ballman Elementary has been working for the past six years as a Professional Learning Committee, as a pilot for our district. After years of hard work and dedication to building a collaborative culture focused on more productive learning for all, Ballman Elementary has been recognized by Solution Tree as a Model PLC. Schools are recognized based on strict criteria, including demonstration of a commitment to PLC concepts, implementation of these concepts for at least three years, and clear evidence of improved student learning over that period. We are so proud of Lori Griffin and the Ballman Elementary staff for this incredible achievement. 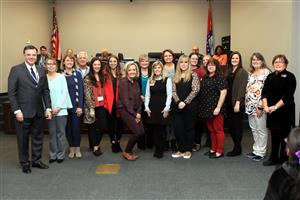 Hannah Clifton and the Southside High School cheer team qualified to compete in The National Cheerleading Championship in Orlando, Florida for the first time in Maverick history. After competing in several rounds against teams from all across the nation, the Maverick Cheer team won 4th in the Nation and was only 1.2 points behind the first-place team. We are so proud of this team for all that they have accomplished. Congratulations! 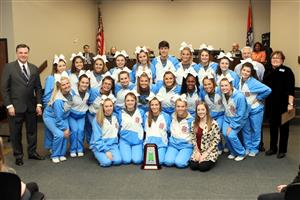 The Ramsey Junior High Ninth Grade band, directed by Kristen Shepherd and Kaitlyn Smith was selected by competitive and blind audition as the 2020 All-State Honor Band representing their class and grade. They performed an impressive program on Friday, February 21 at the Arkansas All-State Music Conference in Hot Springs, AR. Congratulations!

These state-recognized honor performances lead into the Saturday All-State performances in Band, Choir and Orchestra.

Fort Smith EMS is donating an ambulance to the Fort Smith Public Schools planned career and technology center, opening in the fall of 2021.  In partnership with the University of Arkansas- Fort Smith, students will have the opportunity to earn technical concurrent credit and industry-recognized certifications in Healthcare Science pathways including nursing and responsive medicine.  The district is grateful to Tim Hearn and Fort Smith EMS for this generous and instructive contribution. 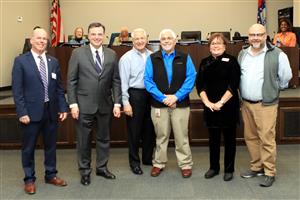