Citizens Committee Submits Proposal to Board of Education 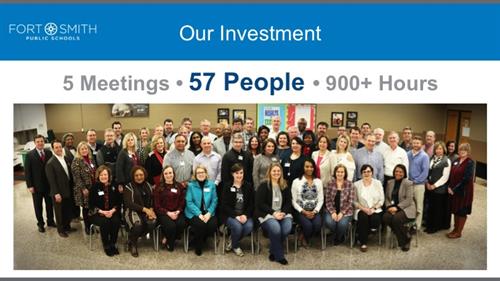 After more than 900 hours of collective work, 57 people led by Jason Green and Alex Sanchez have made a Citizens Committee (CC) recommendation to the Fort Smith Board of Education to move forward with greatest need projects.

The CC was organized in January 2018  and charged with prioritizing Vision 2023 strategies and projects approved by the Board of Education in December 2017. Safety and Security modifications topped the CC's priority list, and the development of Career and Technology program and center was an early consensus winner as well. The CC proposal totals more than $120 million and would require a millage rate increase of 6.888 mills.

Green stressed that he and the CC believe that each project on the original list are important for the District to pursue in the future, but, that their recommendations outline what they believe to be of greatest need at this time. Green encouraged the Board to look for efficiencies in the proposal, “At the end of the day, we need our community to support a millage increase, so if that means the millage increase is lower than what we’ve proposed this evening and some of the priorities and actions are delayed to a future point in time, we would support that as well,” Green said to the school board.

The roughly $120 million proposal includes safety and security modifications at all schools, a CTC program and center, new ninth-grade centers, new gyms, locker rooms and new storm shelters at the high schools, to name a few.

The school board will consider the proposal and whether it will ask for a millage increase on the May 22 ballot during a special called meeting at 5:30 p.m. March 12 in the auditorium of the Fort Smith Public Schools Service Center, Building B, 3205 Jenny Lind Road.

Click here to listen to Jason Green's remarks to the Board of Education.